WASCO, CA—It’s summertime, and roses are blooming in gardens all over America. When other flowers falter and fizzle out from the heat, the queens of the garden keep blooming. 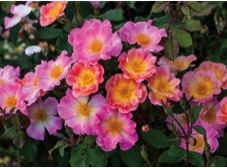 A shrub rose bush, like this Watercolors Home Run® from Weeks Roses, will produce blooms from spring well into fall.

“Most people don’t realize that the major commercial rose production in the US is centered in the Central Valley of California and outside of the Phoenix area in the hot deserts of Arizona,” said Brian Correiar, Manager of Production/Operations Research and Quality Control for Weeks Roses, the largest commercial rose grower in the country. “Roses are grown in some of the hottest places in the nation because roses can handle the heat.”

Roses stand up to summer heat better than most flowers, but even these tough bushes can benefit from proper care and attention. Here are Correiar’s top tips for keeping rose bushes healthy, happy and blooming during summer heat.

When temperatures soar, all plants are susceptible to drying out. Rose bushes should be watered at the soil level. Make sure the entire root zone gets a good soaking, and the water penetrates 12 inches deep. Soaker hoses can do a good job of slowly delivering a steady supply of water than can penetrate deep into the soil.

Watering a rose bush’s foliage and flowers can encourage the growth of black spot and other fungal diseases. Water droplets on leaves can also magnify the sun’s rays, burning leaves. It’s best to water before 10 a.m. before the heat of the day. 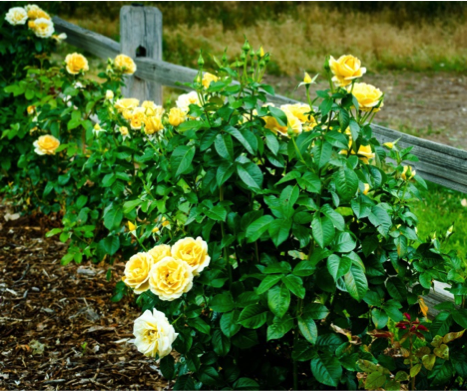 A shrub rose bush, like this Watercolors Home Run® from Weeks Roses, will produce blooms from spring well into fall.

This tip is also related to water. Correiar emphasizes that good moisture in the soil is the key to protecting roses during periods of intense heat. He says the best way to keep the root zone moist is to make sure the soil is generously covered with 2-4 inches of mulch. Traditional mulches of wood chips and bark work well. “Mulch keeps the soil cool and it reduces the water lost to evaporation, so a layer of mulch is a great way to keep plant roots moist,” said Correiar.

Most modern rose bushes produce flowers throughout the warm growing season. But deadheading (snipping off spent flowers) encourages the bush to keep the flowers coming. Deadheading the flowers before they can produce seed hips signals the bush to produce another crop of gorgeous new roses.

Fertilize throughout the season

According to Correiar of Weeks Roses, most rose bushes benefit from three applications of slow-release fertilizer during the growing season. The first feeding should occur right after early spring pruning. Fertilize the bush again after the first blooming. The third feeding should happen in mid to late July—no later than six weeks before the first frost of autumn. Use a fertilizer with a good balance of nitrogen, phosphorus and potassium. Natural compost works well as a fertilizer, and it also helps the soil retain moisture.

Sometimes insect pests can attack roses during the heat of summer. Aphids are a common pest, but these tiny insects can be easily controlled with insecticidal soap sprayed directly on leaves and flowers early in the day. In areas of high humidity where fungal diseases such as powdery mildew and black spot can be a problem, use a neem oil spray to control these diseases.

Follow these tips and you can enjoy beautiful flowering rose bushes in your own garden year after year. For more information about growing healthy roses, visit the Weeks Roses website (www.weeksroses.com) or Facebook page (www.facebook.com/weeksrosesCA ).

Let's Get In Touch!

Visit our contact page to get in touch so we can start discussing your needs and how we can help build your business.